Joaquin Trias Vila was an entrepreneur in the XIX century. His dream was to open a cakeshop in his town, Santa Coloma de Farners.

He worked with his brother for a while, but later studied to be a pastry chef and developed several recipes. In 1908 he rented a house located a 45 Centre street and opened the TRIAS CAKE SHOP.

Due to Santa Coloma de Farners being the capital of county and being well known for its thermal health spas, the products of his cake shop and especially the TEULES biscuits became popular.

The commercialization of the biscuits outside the cakeshop required a container that guarantees their conservation the maximum time possible. It was normal at that time in the biscuits sector to use metal tins. The AVIS TRIAS tins of the time were an attractive and functional support for projecting the brand image.

The exclusive use of natural ingredients, constant innovation of the production processes, the search for new formulas, loyalty to its origins and traditional formulas are features that characterise the TRIAS Company to this day. 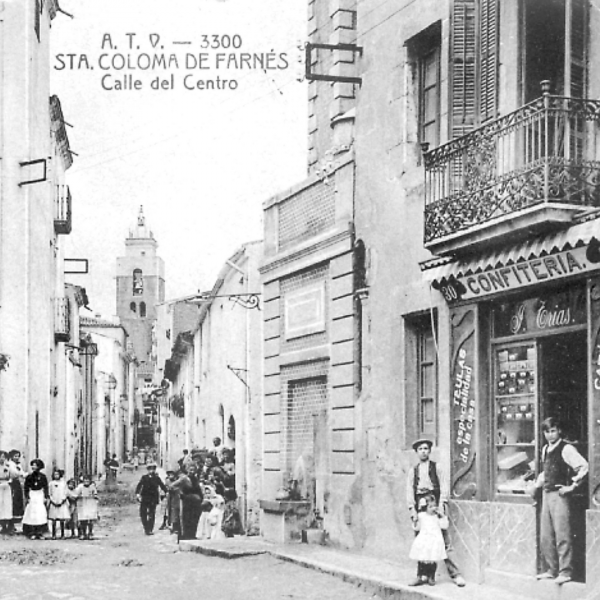 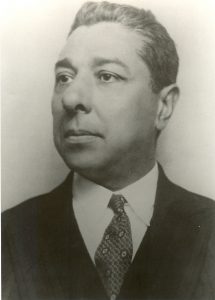 On the 4th June 1908, Joaquim Trias Vila opens his cakes and biscuits shop at 45 Centre Street. The building had previously been used as a cake shop or bakery from as far back as 1838, it was run by Marià Alemany until 1877 and then by a bread baker,  Joaquim Ribas.

The 24th of July Joaquim Trias Vila is granted the registration of a trademark logo of a castle with a flag with the name Teules. 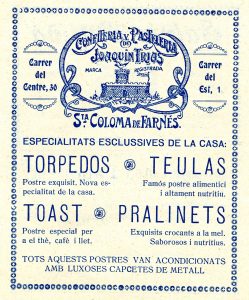 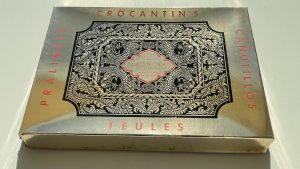 Trias starts to sell, for the first time, its products in cardboard boxes. 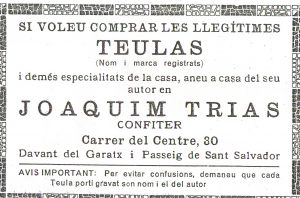 Registration of the name "Teules"

Joaquim Trias Vila applies and is granted the registration of the name “ Teules” so as to distinguish his biscuits.

Registration of the name "Els Vellets"

When Joaquim Trias dies in 1945, his wife continues the company.

In 1955, Joaquims son, Salvador Trias Climent and his wife Maria Mas Fabregas, join  his mother in the cake shop and biscuits trade under the name “Fill de Joaquin Trias” (Son of Joaquim Trias). 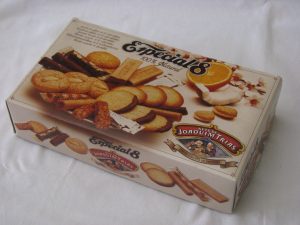 Trias launches the first “Especial” box, the “Especial 8”, an assortment of 8 of the best Trias biscuits. 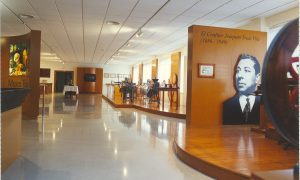 The inaguration of the museum

Inauguration of  the new Trias Biscuits Museum, located above the factory floor.

The Trias Biscuits museum receives the “Bonaplata” award in recognition for its contribution to the conservation of “ Patrimonio Industrial de Catalunya”. 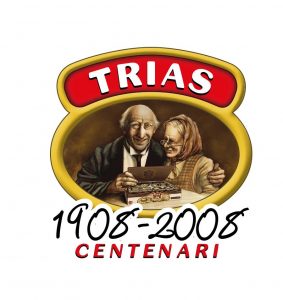 The President of the Generalitat inaugurates the renovations of the Trias Museum and its 100 years are celebrated with the workers, customers and suppliers. 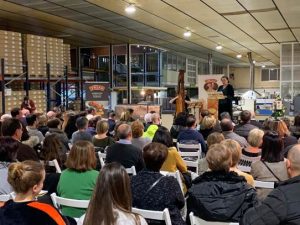 111 Anniversary celebration of Trias Biscuits in Santa Coloma de Farners.  It was a very emotional day together with lots of friends, workers and family.

Would you like to receive the news and promotions from Trias Biscuits?

Receive all the latest news and promotions about our products. ( only in Catalan or Spanish)

“I continue to follow the family tradition of making the highest quality biscuits with enthusiasm and love.

The taste, aroma and texture of our biscuits come from the richness of our recipes and their carefull prodcution and elaboration.” 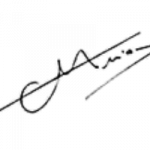